Does Soy Do A Body Good? 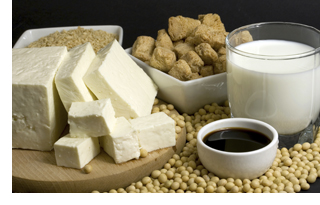 Have you ever wondered whether the current craze for soy is healthy? Once a client declared, as she raised her ubiquitous white and green paper cup, "This is decaf coffee with soy milk. I just wanted you to know." She was assuming I thought that was a good way to drink coffee. And yes, it was great that she left behind the flavored syrups with high fructose corn syrup and the fake creamers with trans-fats, but what about that soy milk?

Let's take a look at soy. Originally, soy was used in Asia as a cover crop to enrich soil. It was much later that Asians used it to season and enrich their meals. In the West, soy was used first by industries to make paper coatings, glues and even as fire-fighting foam. Around the 1950s, food companies started producing soy isolate and soy lecithin. Currently, you can find soy in many foods including soups, imitation meats, non-dairy creamers, infant formulas, cereals and protein powders. If you are allergic to soy, you know just how difficult it is to find foods that do not contain soy. It is everywhere.

Some sources have suggested that soy is a good source of protein that can reduce cholesterol and diminish hot flashes. Let's examine at these claims more closely.

At Nutritional Weight & Wellness, we recommend that our clients are cautious in using soy for several reasons.

Let's summarize these findings. Soy can interfere with thyroid function. It is difficult to digest and does not allow you to fully absorb minerals. Soy has an estrogenic effect—reducing fertility in men, it does not conclusively reduce hot flashes or protect you from reproductive cancers. And as an infant formula, soy may cause early puberty in girls or late puberty in boys or stress our immune system. It really is not a complete protein that works in your body. So, soy milk in your coffee may be doing nothing beneficial for you and may have some serious unwanted effects.

Use Soy Sparingly, If At All…

Traditionally soy was used as a condiment in its fermented forms—as soy sauce, or miso in soups or small amounts of tempeh with rice and vegetables. Asian cultures use soy sparingly and traditionally. Soy milk, soy powders or protein bars do not exist in their diet. Research reveals that soy's benefits are inconclusive and may in fact prove to be harmful. If you like soy, use it sparingly, as a condiment or according to the recommendations of your nutritionist.

For more information about soy, listen to our radio show: The Dark Side of Soy.

Enroll in the Weight & Wellness class series to improve all areas of your health from weight to digestion.

Listen to Our Radio Show

Download a past radio show or listen live every Saturday morning live at 8am on myTalk107 for practical nutrition tips.

Offer Classes at Your Workplace